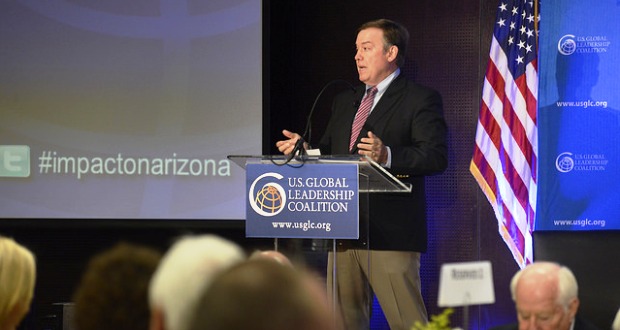 America’s research universities and technology companies frequently experience the great value of U.S. global engagement, and as leaders in the technology and higher education sectors we know that engagement depends upon a clear strategy and commitment from the U.S. government. In no instance is this more true than in the dynamic enterprise of global research collaboration, which can expand American access to new markets, allowing us to sell more of our goods and services, and to a vast pool of great minds, whose intellectual power can help us achieve scientific and technological breakthroughs.

That is why it is troubling that funding for the programs that support U.S. development and diplomacy, which make up only about 1 percent of the federal budget, has declined 14 percent in the past four years.

Federal international development and diplomacy programs not only allow us to live up to our core national humanitarian impulses to help other nations overcome adversity and realize their full potential. They also make America – and even Arizona specifically – stronger through enhanced trade opportunities, increased global security and greater intellectual capacity to drive innovation. What’s more, these programs build relationships that enhance U.S. standing across the globe.

No one knows that better than the people of Arizona. We have a proud tradition of being engaged in today’s interconnected world.  Exports from Arizona’s strong computer and electronics manufacturing sector, as well as transportation related equipment, help drive economic growth. Just last year, our state sold $19 billion in goods and services to foreign markets. Even more, over 13,000 international students were enrolled in Arizona colleges and universities and contributed $367 million to Arizona’s economy.

Development and diplomacy programs play an indispensable role in generating more of the kind of global scientific and technological research and innovation that Arizona State and Intel Corporation – and many other U.S. universities and companies like ours – thrive on. Every day we see that the best scientific and technological innovation today is global in nature. Good ideas don’t confine themselves to national borders, and the relative ease today of international communication and travel encourages sharing among researchers and entrepreneurs.

To understand how development programs help, consider that in 2010 Arizona State and Intel Corporation teamed up with the United States Agency for International Development (USAID) to modernize engineering education in Vietnam through the Higher Engineering Education Alliance Program. As a result, more than 500 Vietnamese faculty members participated in engineering training programs in the U.S. and Vietnam, where they shared best practices and expanded the pool of “work-ready” students for the booming tech trade between our two countries.

Similarly, USAID several years ago helped make it possible for Intel to deploy high-speed wireless broadband in a remote part of northern Vietnam, opening its citizens to affordable 21st-century connectivity with the rest of the world and bringing Vietnam a step closer to national internet coverage. This project also allowed an American company to expand its footprint in an important emerging-market country.

These are just two relatively small illustrations of the many ways U.S. development and diplomacy programs help emerging economies. Importantly, they also they pay off for us here in the U.S. In fact, American exports in Vietnam have increased by 700 percent over the past decade, in part because the U.S. has made a firm commitment to strengthen Vietnam’s technological capacity and make it a better trade and research partner. Not accidentally, Vietnam, one of our fastest growing trading partners, is now working with U.S. based high-tech companies like National Instruments, Cadence and Danaher.

Also, we have long recognized that research collaboration is among the best ways for the U.S. to engage in unofficial “diplomacy” that deepens trust and mutual respect between countries. International science and technology partnerships often build a base of friendship through familiarity and promote democracy and good governance. Conversely, where official diplomatic exchange is weak or severed, scientific and technological advancement almost always suffers.

For all these reasons, appreciation for the role U.S. development and diplomacy plays in global engagement should be stronger. We have, as a nation, the opportunity to preserve and build on our impressive record of global science and technology collaboration. It’s the smart and the right thing to do to build a better, safer, more prosperous America and world.