With new skills and ideas gained at HEEAP workshops, faculty members have implemented a variety of projects at universities and colleges across Vietnam. Read about some of these successful projects below: 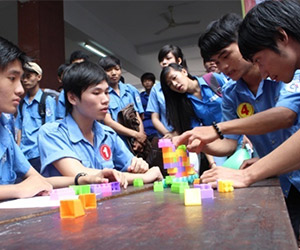 As a part of the “Welcome New Students of 2013” event at Cao Thang Technical College (CTTC), members of the HEEAP 2013 vocational cohort organized “Active Learning with Legos,” a game-show type competition that created an active, playground-like learning atmosphere for new students, while also helping to develop soft skills.

The competition consisted of a preliminary and final round, with more than 300 Vietnamese engineering students participating, while thousands more took part as active spectators.

The HEEAP faculty who organized the competition called it a success because it stimulated the new students’ dynamic thinking abilities and helped them to develop teamwork skills. 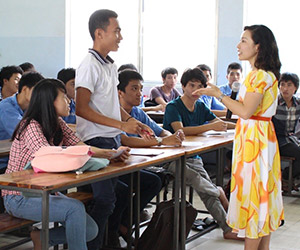 Faculty from the 2013 training developed an  English Club for Cao Thang Technical College (CTTC) students as part of their HEEAP Project. This club aims to enhance technical literacy for students entering the workforce. In April 2014, the English Club held a student workshop titled “Small Talk,” which taught basic English skills to more than 100 engineering students and faculty members.

HEEAP faculty organized the Electrical Engineering Contest to allow students to practice soft skills while reinforcing their engineering knowledge. The contest consisted of four different rounds over a period of two months.

First was the qualifying match, in which 46 teams of three students each took a multiple choice test. The nine teams with the highest scores made it to the two semifinal rounds, which were set up to look like “Đường lên đỉnh Olympia,” a Vietnamese academic game show for high school students. Finally, the three teams with the highest semifinal scores made it to the final round, which featured the same challenge as the semifinal round.

Tran Huy Thong, winner of a personal excellence award and member of the first-place team, said the contest allowed him to learn a lot about the electrical engineering industry, such as how to deal with tough situations and how to work with industry equipment.

“I really like that the contest gave students a lot of knowledge, and inspired us to constantly try to improve in our academic majors,” he said. “I hope that in the future there will be more contests to enhance knowledge and skills.”

The school says it plans to hold similar contests again in the future. 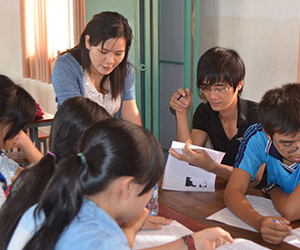 The classes have students participate in role-play situations where they learn to use English to convey their message. The groups are also divided into smaller, more manageable teams to practice their oral skills. 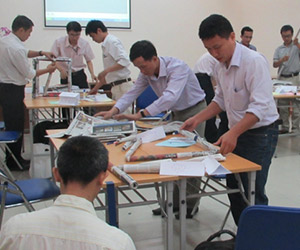 The competition attracted more than 200 students across engineering departments, including mechanical, electrical and automation engineering. The students were divided into 36 teams and competed to construct the highest tower in 30 minutes. Each team was given newspapers, glue, tape, scissors and colored paper to construct their towers. From there, 20 teams were chosen to participate in the final competition, where four winning groups were selected. More than 400 students came out to support their peers in the final round.

Professor Thong Nguyen, who teaches manufacturing technology at CTTC, said the main objective was to introduce students across engineering disciplines to what the faculty learned attending HEEAP 2012 workshops.

“We wanted our students to improve their teamwork and soft skills through the contest,” said Nguyen, who is also the head of the school’s Department of Mechanical Manufacturing.

The competition encourages student creativity, confidence and coordination skills. Le Viet Cuong, a student on the winning team, said, “Through the contest, I learned how to work in a group and how to use good communication skills.”

CTTC currently employs active learning components in nine courses within the mechanical, electrical and electronics departments, consistent with its 2012 project proposal that aims to prepare CTTC graduates with the necessary skills for the global engineering workplace.

However, the contest was the first university-wide attempt at implementing HEEAP learning methods.

With this success, CTTC administrators plan to host similar competitions that replicate what instructors have learned attending HEEAP workshops.

HEEAP faculty members at Cao Thang Technical College (CTTC) coordinated a unique workshop entitled “Understanding and Improving Yourself - Control Your Mind.” The seminar sought to provide students with a better understanding of their cognitive selves and ways to improve their confidence. At the seminar Ho Ngoc presented on the following topics: discovering passion, the power of passion and the brain, method intellectual exercises, thoughts that are harmful for mental and physical health, and more.