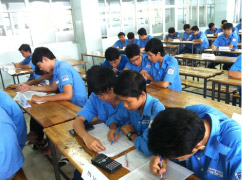 Over the past two months, Electrical Engineering students at Cao Thang Technical College (CTTC) in Vietnam have participated in an academic contest modeled after a popular Vietnamese game show.

HEEAP faculty organized the Electrical Engineering Contest to allow students to practice soft skills while reinforcing their engineering knowledge. “The contest helped [students] to consolidate their knowledge and professional skills. They had the opportunity to improve soft skills such as communication, presentation, teamwork and problem-solving,” CTTC’s HEEAP 2012 cohort leader Nguyen Van Thong said.

Faculty organized the contest in four different rounds, each taking part on different days. First was the qualifying match, in which 46 teams of three students each took a multiple choice test. The nine teams with the highest scores made it to the two semifinal rounds, which were set up to look like “Đường lên đỉnh Olympia,” a Vietnamese academic game show for high school students. 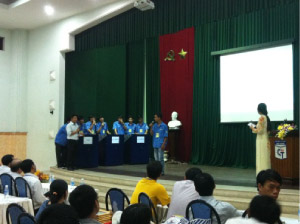 Finally, the three teams with the highest semifinal scores made it to the final round, which faculty set up the same as the semifinal round. The teams competed while their peers, teachers, and department leaders looked on. Also in attendance was Nguyen Giao Hoa, HEEAP Vietnam Country Manager.

Tran Huy Thong, winner of a personal excellence award and member of the first-place team, said the contest allowed him to learn a lot about the electrical engineering industry, such as how to deal with tough situations and how to work with industry equipment.

“I really like that the contest gave students a lot of knowledge, and inspired us to constantly try to improve in our academic majors,” he said. “I hope that in the future there will be more contests to enhance knowledge and skills.” 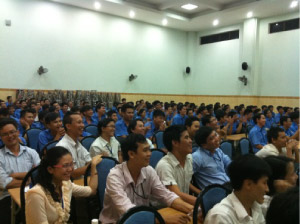 Because of the Electrical Engineering Contest’s success, the school says it does indeed plan to hold similar contests in the future.

To watch the contest for yourself, visit http://www.youtube.com/watch?v=Qx87ePa99us 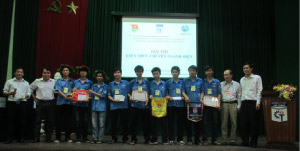 2. Students answer questions in front of peers and faculty at the Electrical Engineering Contest

4. At the end of the contest, the top three teams receive awards and recognition. Some individual students also received personal excellence awards.