Women Engineering Projects in Community Service (WEPICS) is a project within Arizona State University’s Building University-Industry Learning and Development through Innovation and Technology (BUILD-IT) program’s Women in STEM initiative. Achieving greater gender balance in STEM is currently a global trend. It is undeniable that female roles have been underrepresented in STEM majors, including in Vietnam. WEPICS was created in order to nurture the innovation and entrepreneurship of STEM women students, engineers and entrepreneurs, as well as researchers to support the sustainable development of the local community. 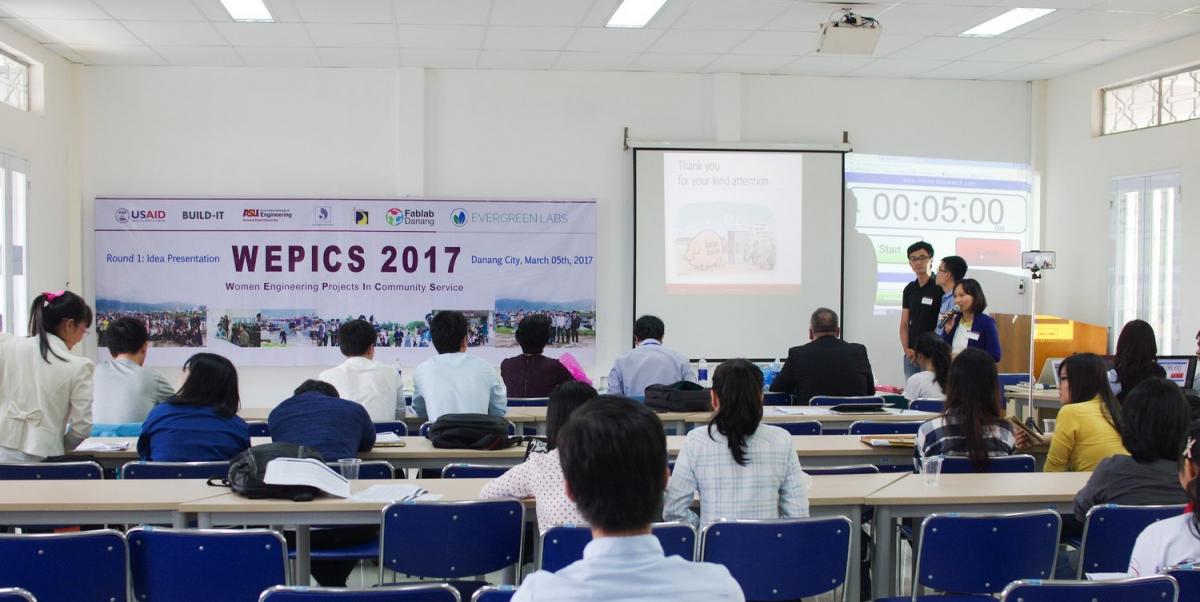 WEPICS background
The WEPICS 2017 Competition is seen as the successor to the Women in STEM Conference held in August 2016 in Danang, Vietnam. The Women in STEM Conference was one of the first conferences in Vietnam with a primary focus on promoting women’s roles in science, technology, engineering and mathematics. The event successfully gathered about 300 guests, including representatives from various governmental departments, enterprises and educational institutions. WEPICS creates opportunities for women to help the community and satisfy their passion to research, create and build, to be motivated in STEM fields through projects and entrepreneurship, and to build networks and relationships.
In reference to the WEPICS Competition, Ezra Simon, representative of the main sponsor of the competition: United States Agency for International Development (USAID) Vietnam, said “This is about further motivating each and every one of you to explore, to discover, to figure out ways to work hand-in-hand and make new connections. This will reduce the isolation of ideas, so that in the future you’ll know how to collaborate better and to get beyond the traditional classroom settings to all the exciting places where changes can happen.” 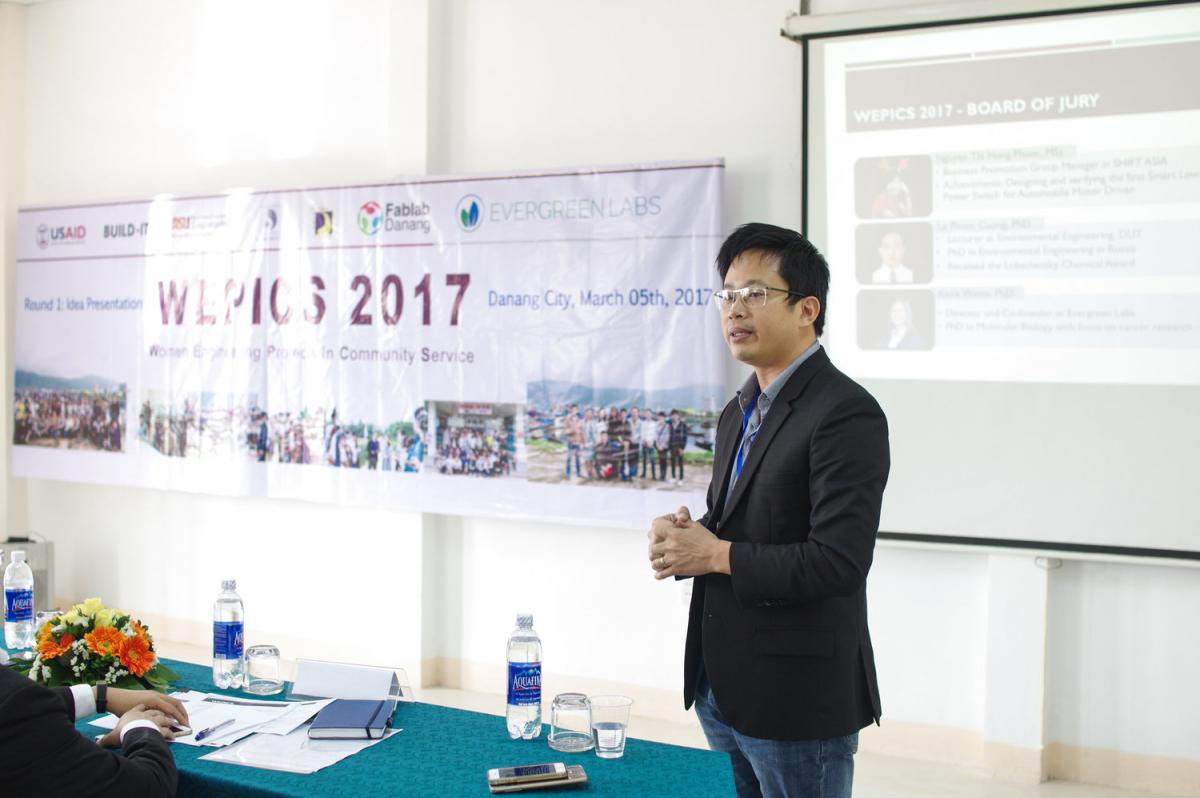 NGUYEN BA HOI, VICE-DEAN OF THE SCHOOL OF INTERNATIONAL EDUCATION (UD), FOUNDER OF FABLAB DANANG gives HIS SPEECH AT WEPICS 2017

At ASU’s international STEM Conference on March 1, 2017 at the InterContinental Hanoi Westlake, the founder of WEPICS from the University of Danang (UD) and UD-Danang University of Technology — one of the pioneers in promoting the women in STEM trend across Vietnam — was invited to share about her promotion model and related activities to other universities and partners.

Competition details
To join the WEPICS Competition, a project team needed to be led by women and consist of four or fewer individuals. All prize eligible team members are Vietnamese and proposed ideas and products had be original, and not previously submitted to any other competitions or programs.
In preparation for the competition launch, the WEPICS organizing committee hosted a community field trip for interested participants. The purpose of the field trip was to explore the local community and find areas where there may be opportunities to bring innovative improvements or solutions to community issues using STEM. On December 21, 28 participants joined the Danang field trip to Tho Quang Fishing Village, Hoa Vang District Health Center, Quang Chau Village, Quang Chau Temple and Tuy Loan Organic Farm. Participants were able to interview community members to get a better understanding of the challenges and unique needs of each location. 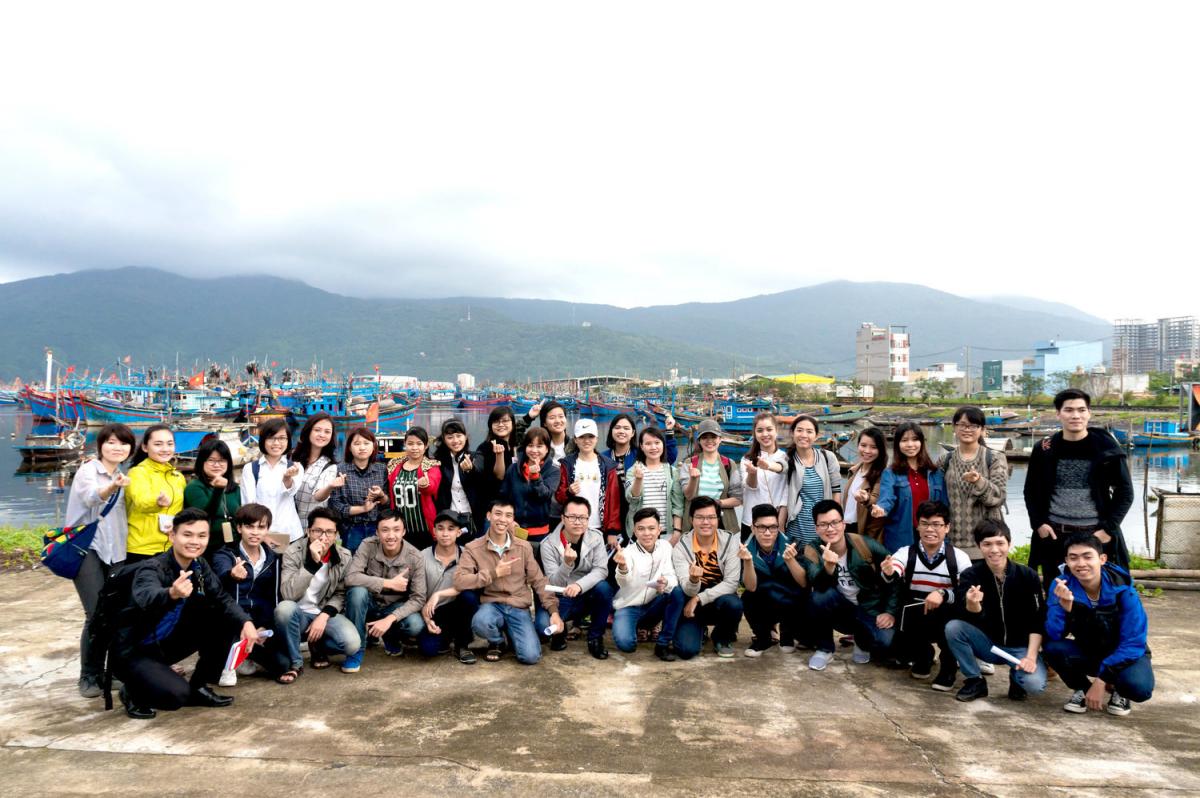 When the WEPICS Competition officially launched on January 1, 2017, a total of 26 teams from different provinces registered to participate. To support the competition and generate a space where all project teams could share their ideas and request community votes, the “Vietnam Women in STEM: Wepics Competition” Facebook page was created on February 8, 2017. After only a month, the number of likes on the page jumped to over 2,100, more than half of which were females. The count also included 100 international likes from countries including the United States, Taiwan, South Korea and Japan. Within Vietnam’s market, 44 percent of the likes are from Danang viewers, 23 percent from Ho Chi Minh City, and the last 33 percent from other provinces. It appears that WEPICS 2017 has become viral not only in Vietnam, but has also drawn the attention of people from around the world.

The Semifinal idea round
The WEPICS semifinal took place in Danang on March 5, 2017. Each of the 26 teams were given a chance to prove their confidence, preparation and improvisational skill, while presenting their project idea through a 10 minute Q&A with the WEPICS Board of Judges. The ideas were judged based on their applicability in the community, innovation and economic feasibility. Final assessment of the ideas were calculated based on the score given by the WEPICS Board of Judges and the results of online community popular vote. 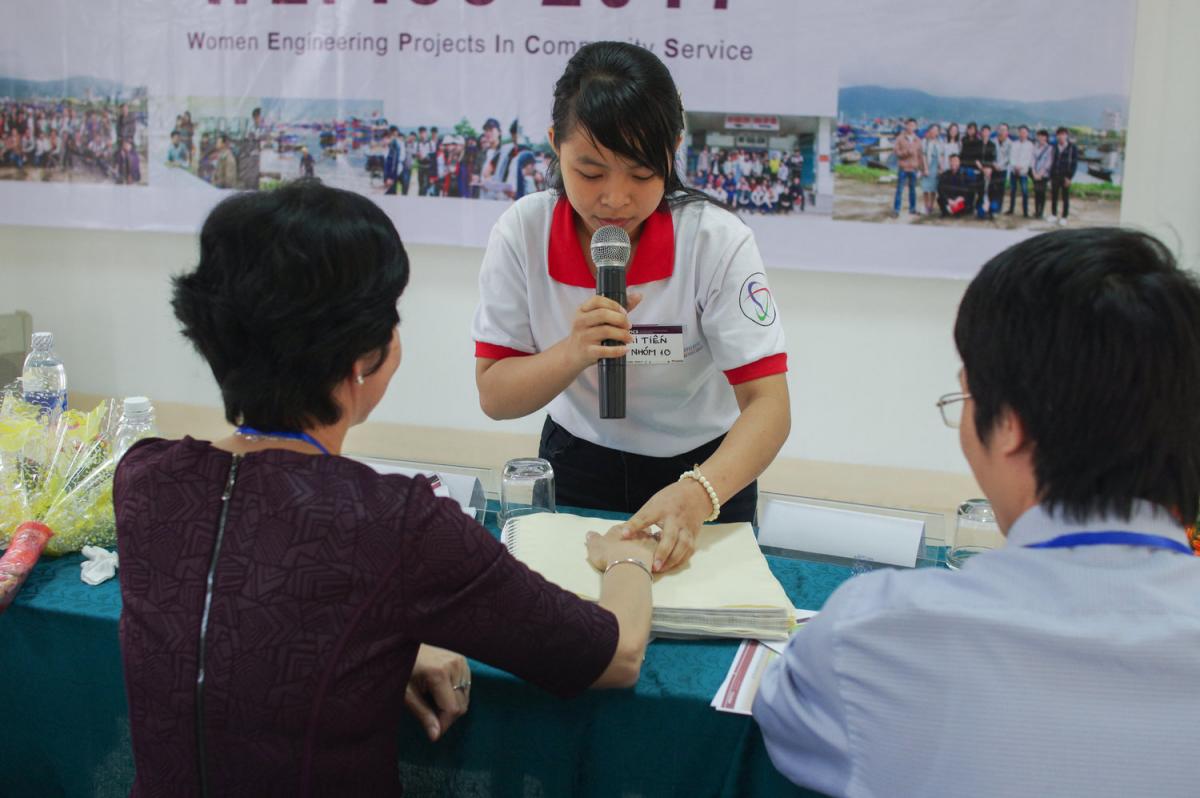 Only 12 teams were selected to continue to the second round to develop their ideas into viable projects. Each of the teams selected to continue on were awarded a budget for project materials, facilities and mentoring from a technical supervisor team. In addition, two outstanding ideas were chosen to each be awarded $250 in cash. All 12 advancing teams are eligible to compete for the final project award prize of $1,000 and a $500 value business start-up package from Evergreen Labs. 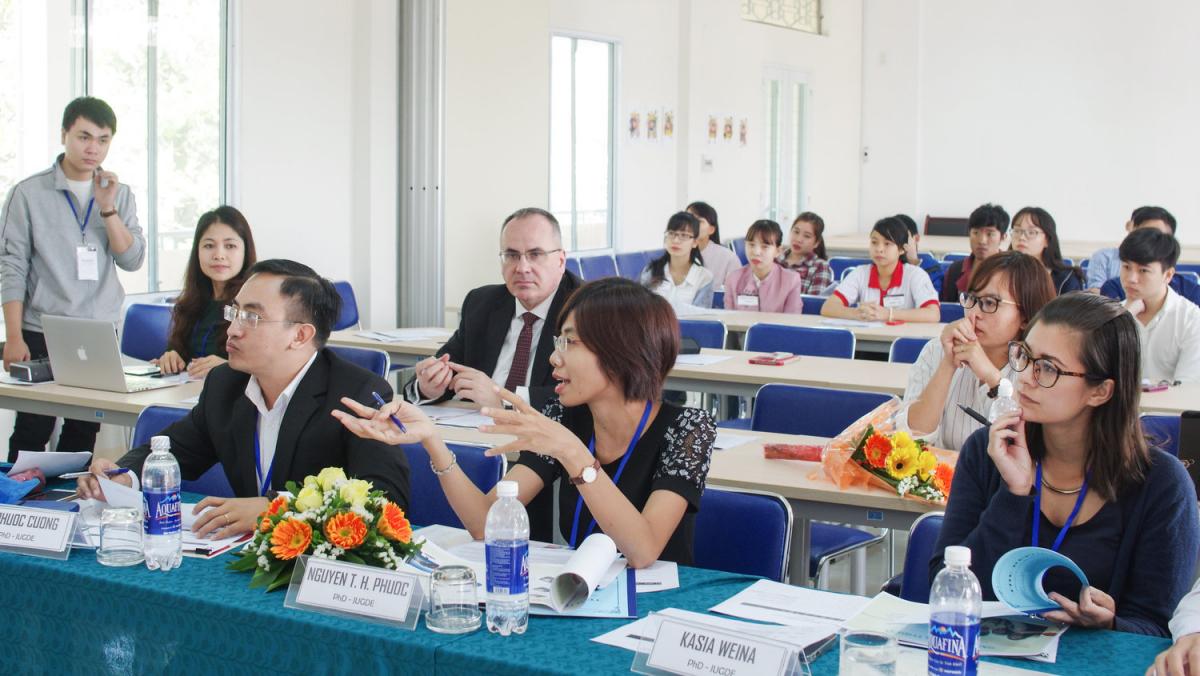 THE CONTESTANTS HAVE BLOWN THE JURY AWAY BY EXCELLENT QUALITY, CREATIVITY AND FEASIBILITY OF THEIR IDEAS.

Jonathan Neale, member of the WEPICS 2017 Board of Judges, enjoyed listening to the idea presentations. Before the final results were revealed, he shared his final thoughts with all of the WEPICS contestants. “The competition has been very, very interesting with lots of very, very good ideas. I’ve been on the jury of many similar competitions and overall I would say that the quality of these ideas is superior to what I’ve seen in the last two to three years. You should all be really proud of yourselves. I have one piece of advice for all of you here today: However you do in the competition, whether first place, somewhere in the middle or wherever you end up, don’t stop here. Keep working! And you will all do very well in the long run.”

Semi-Final idea round winners
WEPICS 2017 would like to congratulate the following 12 teams on advancing to the final round:

5.     STARLIGHT GROUP: Reading and writing technical equipment for the blind

Congratulations to RSL - “Reuse for sustainable living” Group and BIOGAS Group on being chosen to receive the award of $250 for the two most outstanding idea presentations.

Kathy Wigal, BUILD-IT Project Director at Arizona State University, spoke on behalf of WEPICS to all the project teams, saying, "We appreciate your commitment and your work with your team, your creative ideas, your wonderful ability and your passion for the problems in community service that you're trying to solve." 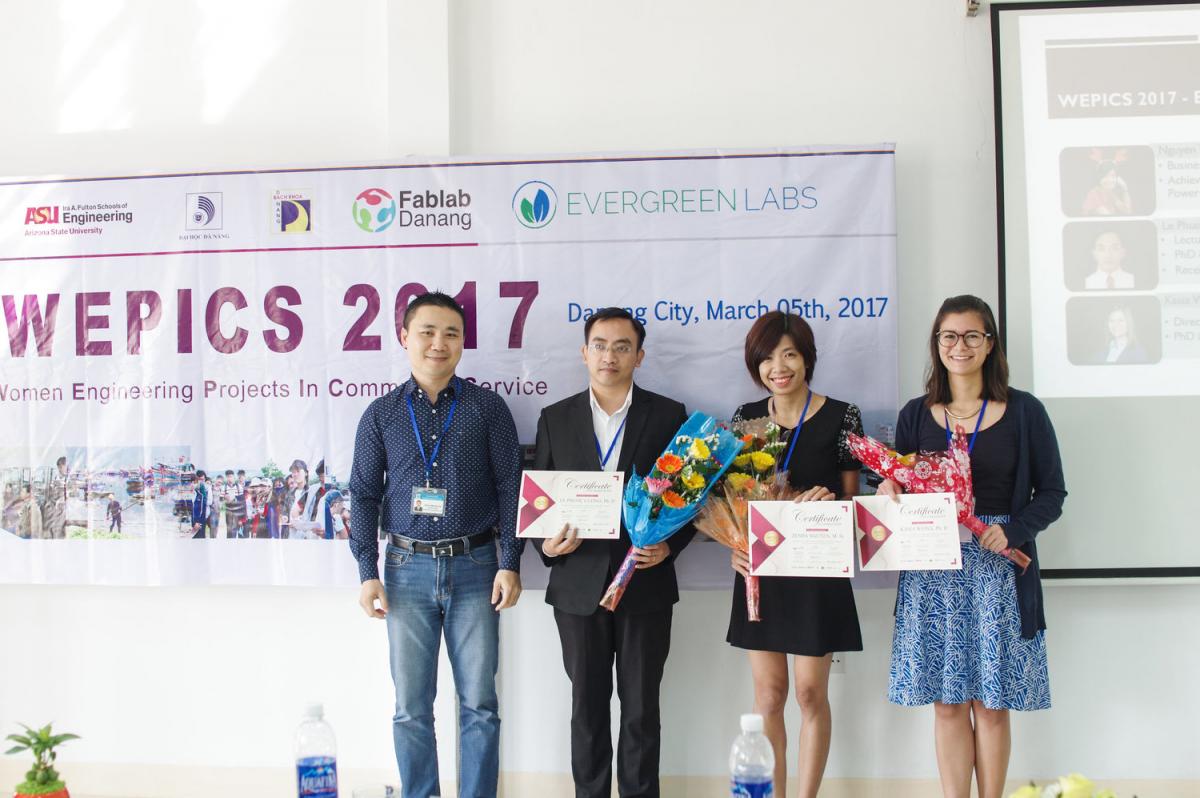 ·       Kasia Weina, PhD: PhD in Molecular Biology with focus on cancer research in Germany. She has worked in various laboratories in different countries and co-founded Evergreen Labs, a social and environmental project development company. She will also be a lecturer and research consultant in the Biomedical program at VN-UK, The University of Danang, Vietnam.

·       Le Phuoc Cuong, PhD: PhD in Environmental Engineering in Russia. He currently works as a lecturer in the Department of Environmental Engineering at UD-DUT. He has implemented much research on realted fields and was announced first place in the national competition “Lobachevski” of The Republic of Tatarstan, Russia in the field of Green Chemistry (supercritical fluid technology) in Kazan, Russia in April 2011.

·       Nguyen Thi Hong Phuoc, MSc: She currently works as the Business Promotion Group Manager in SHIFT ASIA. She has 12 years of experience in global IC memory & analog design. She designed and verifying the first Smart Low-Side Power Switch for Automobile Motor Driver and worked on the first circuit design at 14nm technology in the world. 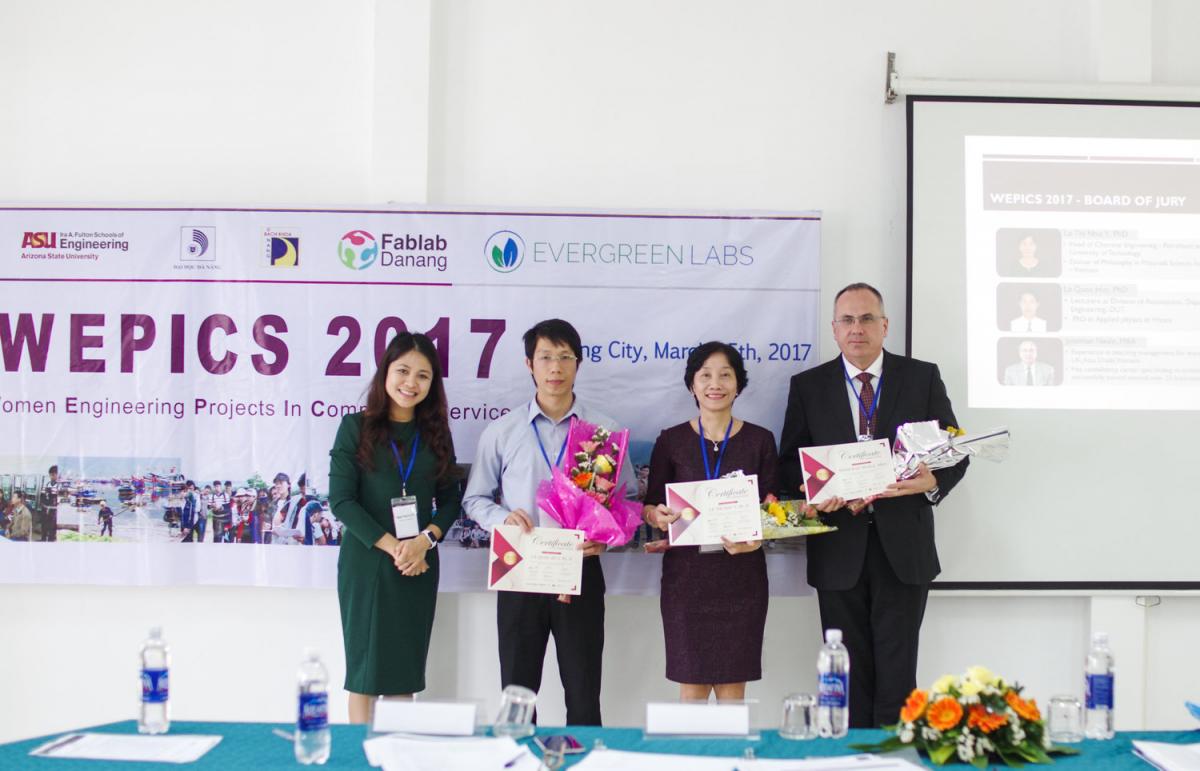 ·       Le Thi Nhu Y, PhD: Doctor of Philosophy in Materials Science, Institute of Materials Science – Vietnam. She served as the Head of Chemical Engineering - Petroleum and Gas Division at UD-DUT. She has authored various publications and led research in related fields.

·       Le Quoc Huy, PhD: PhD in Applied physics in France. He currently works as the Lecturer at Division of Automation, Department of Electrical Engineering at UD-DUT. He’s the author of many national and international publications, research and reports in related fields. He received the “VIFOTEC creative engineering” award on technology and science awarded by VIFOTEC.

·       Jonathan Neale, MBA: He has extensive experience in teaching management for many years in many countries: UK, Abu Dhabi and has now been in Hanoi for nearly 4 years. Prior to entering academia, he had his own consultancy specializing in turnaround management that successfully turned around more than 23 businesses. He has also helped several start-ups and many former students to leading graduate schools around the world.