VietNamNet Bridge – President Truong Tan Sang of Vietnam and President Barack Obama of the United States of America issued a joint statement at the end of their talks in Washington on July 25.

President Barack Obama welcomed President Truong Tan Sang of the Socialist Republic of Vietnam to the White House on July 25, 2013. During their meeting, the two Presidents affirmed their commitment to opening a new phase of bilateral relations between Vietnam and the United States based on mutual respect and common interests. President Truong Tan Sang’s visit comes at an important time for both nations, reflecting a shared desire to build a forward-looking relationship between the two countries. 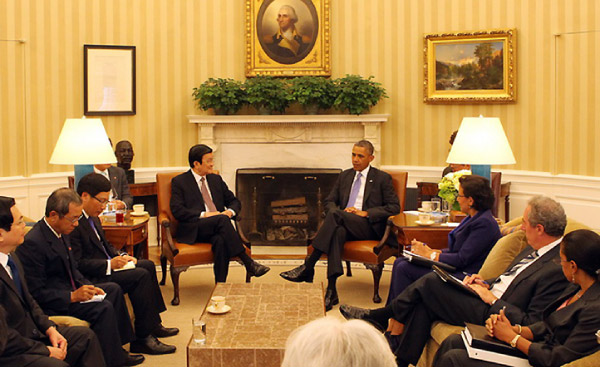 As part of the Vietnam-US Comprehensive Partnership, the two sides agreed to increase high level exchanges as well as contacts at all levels, and to intensify dialogue and cooperation mechanisms. President Obama affirmed the United States’ support for Vietnam’s independence, sovereignty, prosperity, and integration into the international community. President Truong Tan Sang welcomed the United States’ enhanced cooperation in the Asia-Pacific, which contributes to the peace, stability, and prosperity of the region.

The Presidents welcomed the establishment of a regular dialogue between their two foreign ministers, and encouraged dialogues and exchanges between entities associated with political parties in both countries.

President Truong Tan Sang and President Obama agreed to enhance cooperation at regional and international forums including The Asia Pacific Economic Cooperation (APEC), the Association of Southeast Asian Nations (ASEAN), the ASEAN Regional Forum (ARF), the East Asia Summit (EAS), and the ASEAN Defense Ministerial Meeting Plus (ADMM+) to support peace, stability, cooperation, and development in the Asia-Pacific region. The two Leaders reaffirmed their support for the settlement of disputes by peaceful means in accordance with international law, including as reflected in the United Nations Convention on the Law of the Sea. The Presidents also reaffirmed their support for the principle of non-use of force or threat-of-force in resolving territorial and maritime disputes. The Presidents underscored the value of full observance of the Declaration of Conduct of Parties in the South China Sea (DOC) and the importance of launching negotiations to conclude an effective Code of Conduct (COC).

President Truong Tan Sang expressed his appreciation for the Lower Mekong Initiative (LMI). The two Presidents agreed that the two sides would work together with other member countries and the Friends of the Lower Mekong to further strengthen regional cooperation to promote prosperity and sustainable development, narrow the development gap, enhance connectivity, and respond to transnational challenges in the region.

The two Presidents instructed relevant agencies to conclude as soon as possible a bilateral agreement on the construction of new embassies and missions. The Leaders affirmed that the United States’ and Vietnam’s diplomatic presence in their respective capitals should reflect the development of their bilateral ties.

Recalling their discussions in Cambodia in November 2012, President Truong Tan Sang and President Obama reaffirmed their commitment to conclude a comprehensive, high-standard Trans-Pacific Partnership (TPP) agreement as soon as possible this year. A 21st -century TPP agreement will advance regional economic integration, further development objectives, and lead to the creation of jobs in Vietnam, the United States, and all TPP countries, while taking into account the diversity of the participants’ levels of development in the context of a comprehensive and balanced package.

The Presidents welcomed continued efforts to further bilateral economic, commercial, and investment ties, and President Obama noted Vietnam’s reform efforts as a developing economy. They underlined the critical value of these efforts to advancing the bilateral relationship, and the importance of economic cooperation as a foundation and engine for the new Vietnam-US Comprehensive Partnership. The Presidents agreed to enhance cooperation under the Vietnam-US Trade and Investment Framework Agreement (TIFA) Council as well as under the ASEAN Enhanced Economic Engagement initiative and in APEC to increase economic and trade engagement in line with the bilateral Comprehensive Partnership and shared objectives in the World Trade Organization (WTO), APEC, and ASEAN fora. President Obama applauded Vietnam’s progress in economic reform. President Obama noted Vietnam’s interest in pursuing market economy country status and is committed to intensifying the United States’ constructive engagement with Vietnam on its economic reforms. The Presidents acknowledged Vietnam’s intention to accede to the Cape Town Convention on International Interests in Mobile Equipment (CTC).

Both Presidents noted the importance of growing commercial ties between the two economies, and made special mention of: the MOU signed between PetroVietnam and US Export-Import Bank to support trade and investment in the petroleum and energy sectors in Vietnam; the Framework Heads Agreement on the Ca Voi Xanh offshore Vietnam development project between PetroVietnam and Exxon Mobil Corporation; the Cooperation Agreement between PetroVietnam Exploration Production Corporation (PVEP) and Murphy Oil Corporation; an MOU between Metropolitan Life Insurance Company (MetLife) and Bank for Investment and Development of Vietnam (BIDV); and the Vietnam Ministry of Finance's approval in principle for establishment of a fund management company by ACE Insurance. The Presidents welcomed the US Department of Agriculture’s support for capacity building and training programmes designed to help Vietnam adopt and apply sound science and technology to the benefit of Vietnamese farmers, agricultural companies, and consumers. The two leaders recognized the importance of protecting the most vulnerable populations while pursuing economic development, including working together to combat child and forced labor.

President Truong Tan Sang and President Obama discussed the importance of scientific and technological cooperation. They welcomed the 8th meeting of the Joint Committee for Scientific and Technological Cooperation to be held this autumn, and highlighted efforts to build ties between the scientific communities in Vietnam and the United States to strengthen bilateral relations, respond to climate change and other global challenges, and foster innovation-driven economic growth. President Truong Tan Sang and President Obama reiterated their intention to continue scientific cooperation, including in the areas of civil nuclear energy, space technology, and maritime research. The Presidents highlighted the successful conclusion of a joint effort to remove all highly enriched uranium from Vietnam. The two leaders agreed to continue cooperation to support Vietnam’s aspirations for a peaceful nuclear energy program with the highest standards of safety, safeguards, and security.

The Presidents agreed on the need to enhance educational, cultural, and people-to-people ties between Vietnam and the United States. They remarked on the rapid growth of Vietnamese students studying at US universities and colleges, and expressed hope that more US students will pursue study abroad opportunities in Vietnam. They agreed that close cooperation on education and training are critical elements to the next phase of the relationship. They also noted that robust English language instruction will help Vietnam compete in the 21 st century global economy. President Truong Tan Sang and President Obama noted the success of bilateral education and exchange initiatives, especially the Fulbright program and the Higher Engineering Education Alliance Program (HEEAP). The two Presidents noted the success of the Fulbright Economics Teaching Programme and President Truong Tan Sang welcomed the initiative establishing a Fulbright University in Vietnam.

President Truong Tan Sang and President Obama welcomed increasing bilateral cooperation to reduce greenhouse gas emissions in Vietnam through promotion of clean energy, energy efficiency, and sustainable forestry, and to strengthen Vietnam’s resilience to climate change, rising sea level and natural disasters, including through the United States Agency for International Development’s (USAID) Clean Energy Program and Forests and Deltas Programme. President Obama reaffirmed the United States’ commitment to providing further medical and other care and assistance for persons with disabilities, regardless of cause.

The two leaders also agreed to work together, along with their LMI partners, to promote scientific research, capacity-building, and dialogue to ensure the long-term health and sustainability of the Mekong Delta and the Lower Mekong River Basin. President Obama expressed appreciation for Vietnam’s leadership as the co-chair of the LMI Environment and Water Pillar, which has included two joint research proposals from Vietnam on water resources management in the basin. The two leaders expressed satisfaction with the recent conclusion of the Agreement on Health care and Medical Sciences Cooperation and looked forward to enhanced public health cooperation to promote global health security. President Truong Tan Sang expressed his appreciation for the US government’s continued support through the President's Emergency Plan for AIDS Relief (PEPFAR) for Vietnam’s efforts to build sustainable systems for HIV/AIDS prevention, treatment, and care.

The two Presidents agreed that extensive cooperation in addressing war legacy issues to deepen mutual trust has allowed both countries to develop a relationship that looks to the future. President Obama expressed his appreciation for Vietnam’s continued cooperation in providing for the fullest possible accounting for US personnel missing in action (MIA). President Obama reaffirmed the US commitment to assist Vietnam in its MIA accounting efforts. President Truong Tan Sang noted the US Government’s contributions to Vietnam’s efforts to clean up unexploded ordnance (UXO), assist those injured by UXO, and prevent future casualties. The Presidents expressed satisfaction with progress on USAID and the Vietnamese Ministry of National Defence’s project to clean up dioxin contamination at Danang International Airport. President Truong Tan Sang welcomed plans by the US Government to conduct an environmental assessment of dioxin contamination at Bien Hoa Air Base.

The two leaders agreed that the United States and Vietnam would continue to cooperate on defense and security. They expressed satisfaction with the Memorandum of Understanding on Advancing Bilateral Defense Cooperation of 2011 and reaffirmed their commitment to its full implementation. The Presidents agreed to continue the US-Vietnam Defense Policy Dialogue and the bilateral Political, Security, and Defense dialogue as opportunities to review the defense and security relationship and discuss future cooperation. The two Presidents agreed to expand mutually beneficial cooperation to enhance capabilities such as search and rescue and disaster response. The Presidents also underscored the importance of enhanced cooperation in non-traditional security matters and agreed to work more closely to counter terrorism; enhance maritime law enforcement cooperation; combat transnational crime including piracy, and narcotics, human, and wildlife trafficking; and address high-tech crime and cyber security. President Obama welcomed Vietnam’s decision to participate in United Nations peacekeeping operations and emphasized the United States’ desire to assist with training and other support for this effort through the Global Peace Operations Initiative (GPOI).

Promotion and Protection of Human Rights

The Presidents took note of the benefits of a candid and open dialogue to enhance mutual understanding and narrow differences on human rights. They emphasized the importance of protection and promotion of human rights. President Truong Tan Sang informed President Obama of Vietnam’s efforts and achievements in promoting human rights and rule of law and in protecting the rights of religious believers. President Truong Tan Sang also affirmed that Vietnam was prepared to sign the United Nations Convention Against Torture by the end of the year and stated that Vietnam would invite the Special Rapporteur on Freedom of Religion or Belief in 2014. Both sides reaffirmed their commitment to uphold the United Nations Charter and the Universal Declaration of Human Rights.

President Truong Tan Sang and President Obama highlighted the importance of enhanced cooperation on culture, sports and tourism to strengthening people-to-people exchange and mutual understanding. They took note of the success of the Vietnamese-American community in the United States and their important contributions to the growth of bilateral ties. The two Presidents encouraged more people-to-people exchange through art performances, concerts, exhibitions and other cultural and sports events between the two countries.