On November 13, 2017, the second national conference and exhibition on Women in Science, Technology, Engineering and Math, better known as STEM, took place at Ho Chi Minh City University of Technology as part of the Building University-Industry Learning and Development through Innovation and Technology, also known as BUILD-IT, Alliance of Arizona State University. The goal of the conference was to highlight female role models and to strengthen women’s connections in the academic and research community. 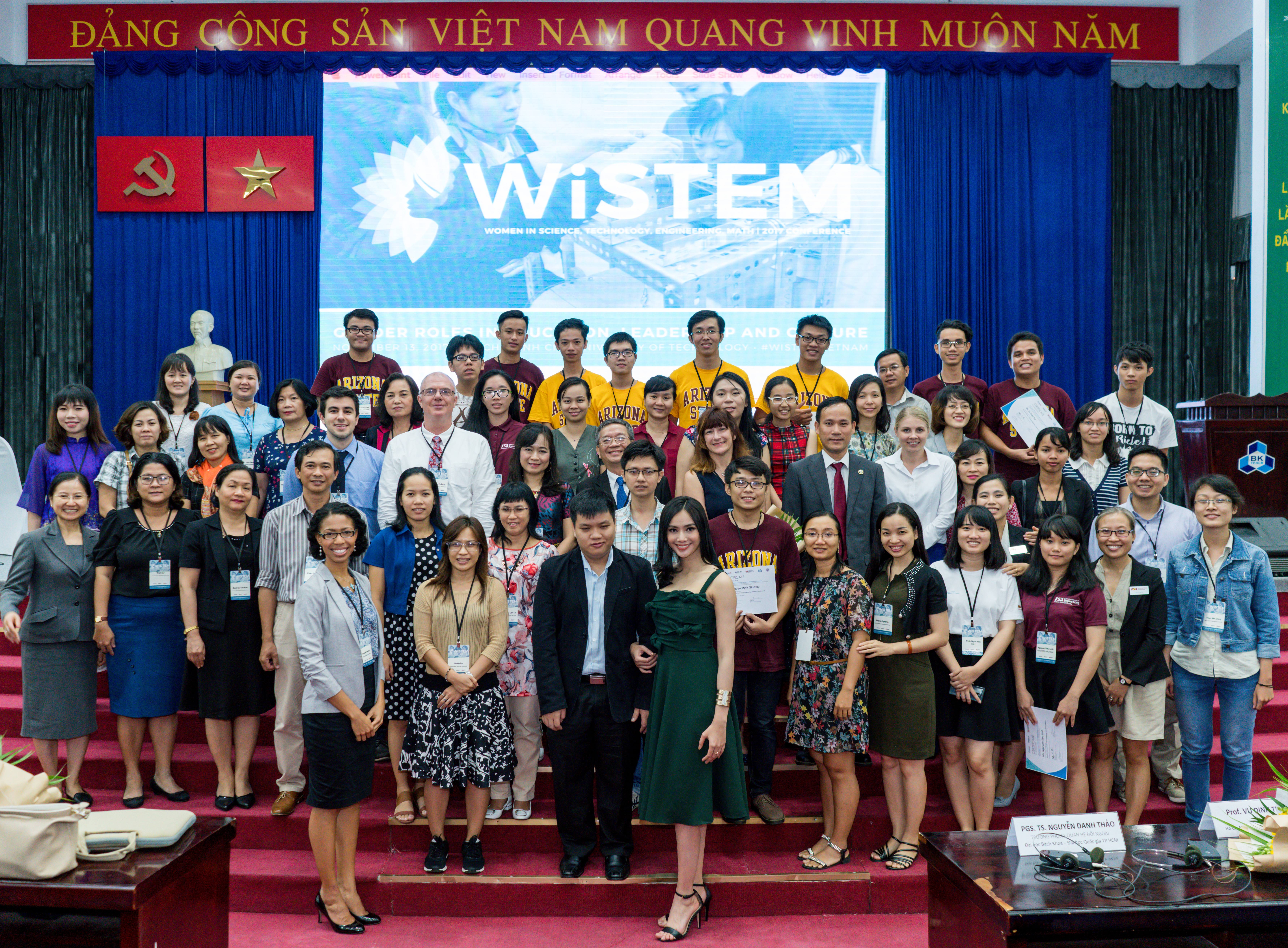 Over 250 delegates attended the conference including United States Consul General in Vietnam, Mary Tarnowka, and the Vice President of Ho Chi Minh City People’s Committee, Le Van Khoa. The conference was themed, “Gender Roles in Education, Leadership and Culture.” Much of the discussion centered on the vital need to achieve gender equality in the STEM field.
At the event, keynote speaker Le Thi Kim Phung, associate professor and deputy dean of the faculty of chemical engineering, Ho Chi Minh City University of Technology, pointed out that current statistics show that the percentage of female students choosing to study science, math, engineering and technology is low. She went on to explain that it is mainly social and environmental factors that have led to girls’ low interest in STEM fields, and to more challenges in school for girls who do choose to study STEM than for their male counterparts. This is largely due to the lack of resources to support women.
"Parents and the whole society need to encourage girls to participate in research and science because there are still many women who are successful in this field," Phung stressed.
“In life and work, difficulties cannot be avoided; however, we have to keep working,” stated honored speaker Nguyen Thi Hiep, lecturer of biomedical engineering, International University (VNU-HCM). “Then results and success will also come.”
In addition to the morning plenary sessions, delegates’ favorites also included the afternoon workshops Train the Trainer Coding for Girls, Cloud Computing with Amazon Web Services Educate and Iridescent Learning’s Technovation. Attendees were treated to a closing musical performance by X Factor Vietnam 2016 Finalist Truong Kieu Diem.
Women need continued support in the STEM fields and it is conferences like these that help inspire women to lead in areas where they have been traditionally left out.
“Investing in gender equality and women’s empowerment can unlock human potential on a transformational scale,” stated Consul General Tarnowka in her opening remarks. “And that is why we are here.”
The conference was produced in partnership with HCMUT and the Vietnam Association for Intellectual Women. The United States Agency for International Development, Oracle Vietnam and Coca-Cola sponsored the conference.
BUILD-IT, in addition to hosting an annual conference, is establishing university campus-based clubs and associated academic programing, such as the hugely successful Engineering Projects in Community Service competition that began at the University of Danang in 2017, to provide female mentors and offer scholarships for women earning engineering and technical degrees.
The BUILD-IT Alliance is the latest advancement in a series of initiatives led by the Ira A. Fulton Schools of Engineering at Arizona State University. Sponsored by USAID, the alliance links STEM instruction to the needs and capabilities of industry partners by producing graduates ready for inclusive, technology-based careers. More than 20 industry partners currently support the program. A key objective is accreditation by the ASEAN University Network in the areas of biotechnology, chemistry, mathematics and computer science.
To date, ASU initiatives in Vietnam have provided engineering education support and training to over 9,000 Vietnamese participants, 30 percent of whom are women, and has invested more than $25 million in higher education innovation.
By Khandle Hedrick
Click here to view for more photos from the WiSTEM Conference: https://www.flickr.com/photos/heeap/albums/72157689949171495/with/38555850742/