Robotics workshop kicks off use of distance learning classrooms

BUILD-IT hosted its first Train the Trainer Workshop: Introduction to Engineering Using Robotics Experiments, a three-day workshop sponsored by Intel, held December 13-15, 2016. The workshop was planned as part of BUILD-IT’s sixth core activity that focuses on project-based curriculum. This faculty-focused, hands-on workshop, created and instructed by ASU’s Yinong Chen, was designed to teach professors how to engage and inspire engineering students by using robotics experiments.

Professor Yinong Chen (back 9th from left) poses with his workshop class at the Ho Chi Minh City University of Technology and Education’s Distance Learning Classroom in front of the maze with their Arduino Robots after the final competition.

The Train the Trainer event was preceded by a Student Robotics Workshop, where 20 university students met at Cao Thang Technical College on December 11 in Ho Chi Minh City to build and test the robots that would be utilized at the four locations. This workshop provided a great opportunity for students to assemble a robot from scratch. Students also had the chance to test the robots by using the ASU VIPLE programming language. Within just two hours after building the robots, the students were able to learn the visual programming language and practice using it to make the robots move.

Chen was stationed in Ho Chi Minh City and led the student workshop at Cao Thang Technical College as well as the Train the Trainer Workshop from the distance learning classroom at the Ho Chi Minh City University of Technology and Education. Three university professors who had previously completed a similar workshop as part of HEEAP, were trained to facilitate instruction along with Chen at the other three distance learning classrooms. The workshop is an excellent showcase of innovative pedagogy combined with advanced technology to enable a simultaneous four-site workshop on project-based curriculum. One professor stated that being able to see participants from other remote sites through this simultaneous learning experience provided “more motivation to participate in the workshop.”

The Train the Trainer Workshop began by highlighting the challenges in traditional approaches to teaching programming to engineering students in which the complexity and abstract features of programming languages discourage students from programming and thinking creatively to solve engineering problems. Faculty were then introduced to a project-based curriculum design approach to empower and engage students as they explore authentic, real-world challenges. Across all four sites, 103 participants were given hands-on robot programming exercises on both a simulator and real pcDuino robots to experience the impact of the instructional method from the student point of view in a team-based setting. 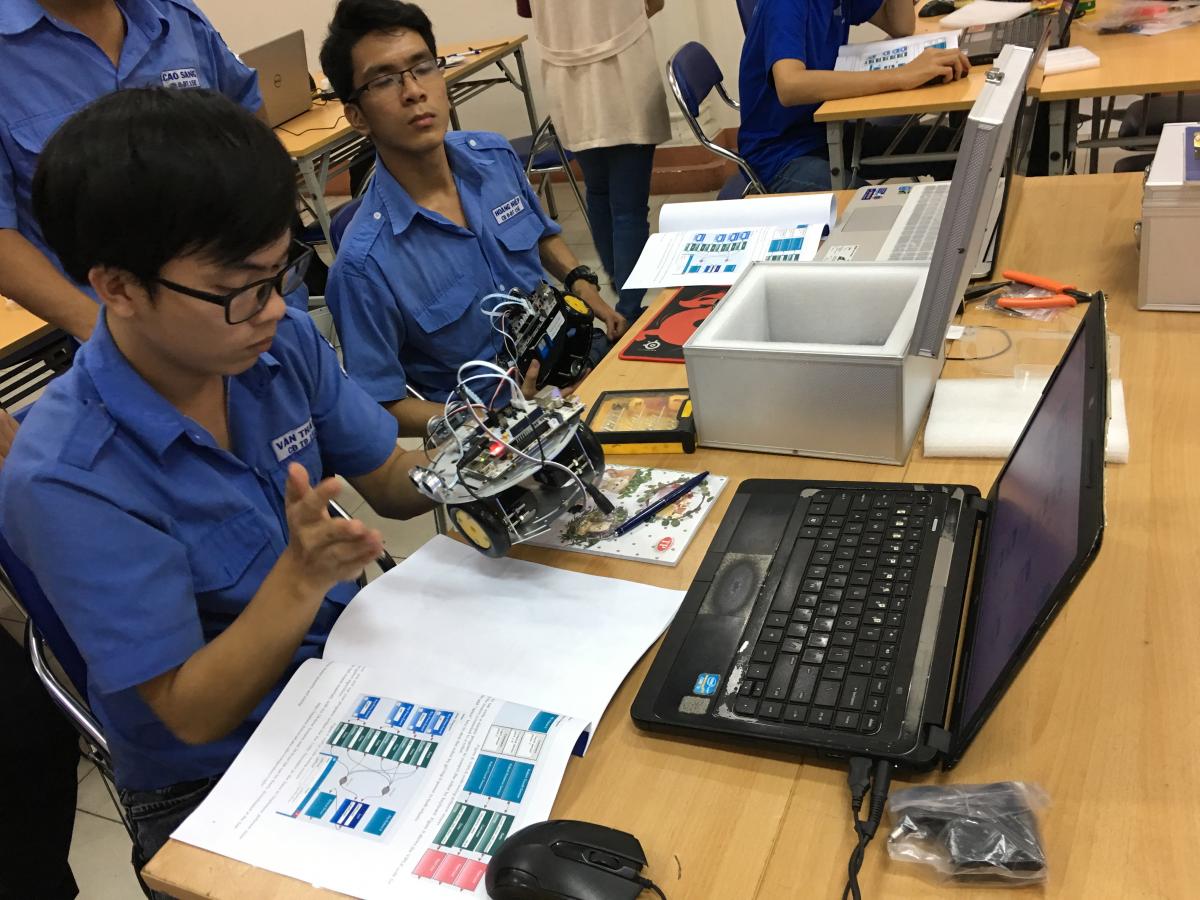 Students from Cao Thang Technical College work together to build and test the robots in the Student Robotics Workshop led by Professor Yinong Chen.

Even nearing the end of the workshop, faculty remained fully engaged in the learning experience, debugging the programs, testing the robots and refining the algorithms to prepare for the final robot competition. For the final competition, participants were divided into teams of four where their programming languages were tested by how quickly and efficiently their robots could navigate a given maze. Excitement and team spirit filled all four classrooms throughout the competition.

When asked to share their opinions about the workshop, many participants mentioned how excited they were to have the opportunity to use the ASU programming tool with an actual robot. They also stressed how the practical experience of controlling a robot would encourage innovation among students in the classroom. Faculty especially noted the benefits of participating in project-based learning and recognized the ease with which they could apply this instructional approach to their own courses. At the end of the workshop, participants were also provided full teaching materials to be able reproduce the course in their own classrooms and communities.