The Lac Hong University team defeated their Malaysia rivals on Sunday to win the 2017 Asia-Pacific robot contest (ABU Robocon 2017) on August 27 in the Japanese capital of Tokyo. 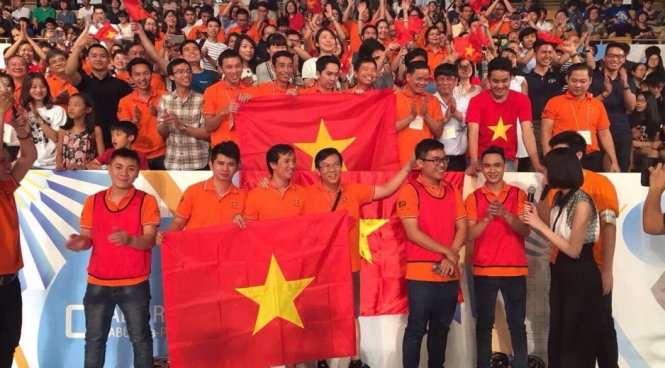 Robocon 2017 attracted the participation of 19 teams from 18 countries and territories across the Asia-Pacific region and was hosted by the Japanese broadcaster NHK. At the quarter and semi-finals, the Vietnamese team had outstanding performances, resulting in winning over teams from India and the host country team of Japan. With its all-out efforts, the Robocon Vietnam team defeated Malaysian team at the final match that lasted one minute and twenty seconds.

This is the sixth time that Vietnam has been the champion of the robot contest. Its five previous championships victories were in 2002, 2004, 2006, 2014 and 2015. Vietnam has also become the country with the most wins at the ABU Robocon. This is the second time that a team from Lac Hong University has won the Asia-Pacific robot contests for college students, following their previous victory in 2014.

Under this year’s game rules, a robot is required to throw discs at balls which are on seven spots consisting of circular tables attached to columns of varying heights. Scores will be counted when a team’s discs land on a spot where its ball has been knocked off, hence the theme “The Landing Disc”. If a team successfully knocks off all the balls and lands its discs on all spots, they win the game with an APPARE victory.

Vietnam’s national TV broadcaster VTV will host the contest in 2018.