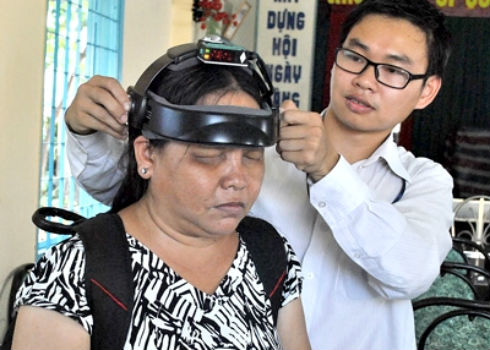 The Pedagogical Research Laboratory at the University of Ho Chi Minh City by the Ba Hai Establishment of Technology has introduced an intuitive graphical programming language course for students and those with special learning needs with a unique tuition rate of 1 USD per course.

“Money is important, but money alone is not all," Dr. Nguyen Ba Hai, who instituted the concept, said. "[The] set fee of $1 is to avoid the virtual register in the free course.”

Started in 2010, the number of course participants number about 100 people comprised of varied socio-economic statuses. There are even some who return to study with Ba Hai after graduation.

One successful study Bai Hai conducted is the “magic hat” for the blind. When worn, the hat helps one move about freely by avoiding obstacles.

Ba Hai said the hat has gone through seven tests, both inside and outside the lab. The original price of the product was $20 million; however, the team has reduced the hat’s size, thereby lowering the cost to $5-6 million each.

Bai Hai plans to donate four of the specialized hats to the blind organization Thu Duc.

The idea of the $1 class began in 2001 when Ba Hai attended the University of Technical Teachers HCMC, where he also sold used books and peddled sunglasses and watches for a living.

After receiving a master's scholarship in Korea, Ba Hai pursued his passion in research and received three patents. His master’s thesis on Customs reached a maximum of 100 points.

At age 28, he specialized in biorobotics (biological robots) in Korea, meriting him with the best doctoral thesis. He was offered a $5,000 monthly salary by the National Institute of Korean Cars, in addition to many other invitations from other renowned companies.

However, work in Korea was not his dream. Instead, Ba Hai wanted to manufacture products that would actually help his community back at home. He decided to return to Vietnam where the $1 class was born.

In addition to teaching, Ba Hai also established an English Club of Technical Education. True to his work ethic, Ba Hai said that people often call him "the ghost,” since he is prone to leave home late at night to work in the lab, constantly creating and inventing.