A leadership conference and exhibition at the University of Danang drew several hundred attendees from across Southeast Asia as the first event in the Women in STEM Leadership Program — part of the Building University-Industry Learning and Development through Innovation and Technology Alliance. BUILD-IT, which was announced by President Barack Obama during his trip to Vietnam in June, is funded by the U.S. Agency for International Development.

The conference aimed to highlight female role models, encourage the exchange of knowledge and identify paths to entrepreneurship while offering networking opportunities in a fun, interactive event. The program included keynote presentations, panel discussions and a technology and innovation exhibition sponsored by Fablab Danang.

“Our goal was to connect women in the STEM community,” explained Kathy Wigal, BUILD-IT project director and associate director for Curricular Innovation at ASU. “The Forum enabled open discussions on the roles of women in the high demand professions of math, engineering, technology and science.”

Wigal noted that a key component of the conference was the willingness of speakers and forum panelists, who came from both academia and industry, to share their pathways to STEM careers. “The insights they offered about their personal journeys were inspiring to a new generation of women,” she said. 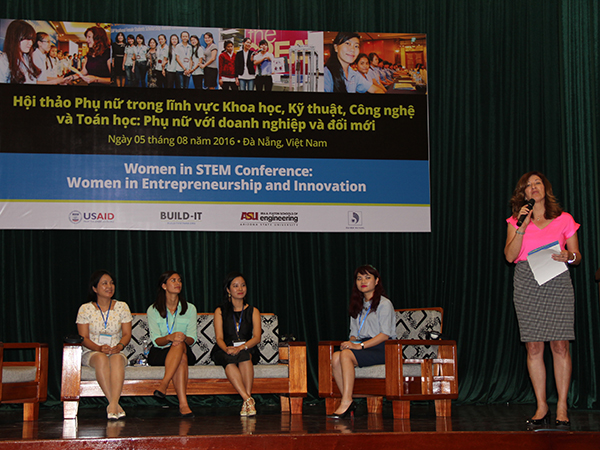 One compelling moment took place during the morning keynote address by Ly Le, associate professor, School of Biotechnology, International University, Vietnam University, when she was spontaneously joined on stage by her six-year-old son. Le, who built the Computational Biology Center at IU and leads an active research group in applied bioinformatics and drug design, told the audience that women do not have to choose — that there is room for family and a career in STEM.

WiSTEM, in addition to hosting an annual conference, is establishing university campus-based clubs and associated academic programs that provide female mentors and offer scholarships for women earning engineering and technical degrees. Women in Engineering Projects in Community Service, a social entrepreneurship program known as WEPICS in which teams design, build and deploy systems to solve engineering-based problems for nonprofits and schools, was kicked off during the event.

With technology and science advancing at such a rapid rate, and with the Trans-Pacific Partnership and the ASEAN Economic Community launch, many Vietnam public and private universities are encouraging women to seek educations that will prepare them for a career in STEM, acknowledging that it is more important than ever to inspire and educate women and girls to challenge the status quo and be a part of this global revolution.

“Leaders in STEM career fields will be exploring some of the most exciting realms of discovery and technological innovation and will occupy the high-tech, high-wage jobs of the future,” said USAID Vietnam Mission Director Michael Greene. “As a result, increasing opportunities for women in these fields are critically important in realizing greater economic success and equality for women across the board.”

The BUILD-IT Alliance, administered by HEEAP, is the latest advancement in a series of initiatives in Southeast Asia led in partnership between USAID and ASU’s Ira A. Fulton Schools of Engineering. The Alliance links STEM instruction to the needs and capabilities of industry partners by producing graduates ready for inclusive, technology-based careers. More than 20 industry partners currently support the program. A key objective is accreditation by the ASEAN University Network in STEM areas including biotechnology, chemistry, mathematics and computer science.

To date, HEEAP has provided engineering education support and training to nearly 5,500 Vietnamese participants, 27 percent of whom are women, and has invested more than $25 million in higher education innovation. In addition, 436 female students pursuing technical education in Vietnamese vocational colleges have received scholarships, and two Women in Engineering Master’s Fellows are attending ASU this fall.

“I was awed by the excitement and the number of women in the room — including several from the first all-female HEEAP cohort that I taught several years ago,” said Wigal. “It is exciting to see how far we have come and the strong relationships that were created today. Having role models and mentors is a powerful force that we cannot take for granted, as evidenced by one young woman who approached our team to inquire about a doctoral program she has been dreaming about, and several others hoping to start their own businesses.” 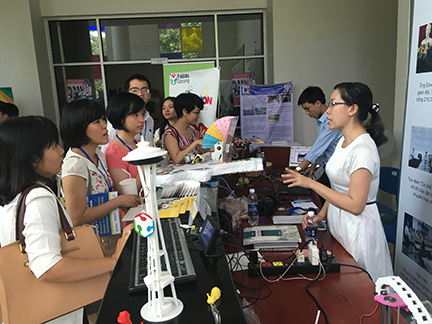 Fablab Danang, the first makerspace in Danang and sponsor of the technology and innovation exhibition at the WISTEM Conference, was a popular stop during the event. Photo courtesy of BUILD-IT.

Government Partners include: the Ministry of Education and Training, The Ministry of Industry and Trade and the U.S. Agency for International Development.