Vietnam is looking to become a country of innovators, and the country’s student entrepreneurs are answering the call.
To celebrate the grand opening semester of the Maker Innovation Space at the University of Danang in Vietnam, the Maker to Entrepreneur Program put on a one-week competition for students to show their ability to innovate.
The Maker to Entrepreneurship Program supports prototypical startups and promotes their innovative ideas and scalable products. MEP came out of a series of Maker Innovation Forums sponsored by the U.S. Department of State and organized by Arizona State University in the cities of Ho Chi Minh City, Danang, Hanoi and Can Tho. At these forums, entrepreneurs, small business owners, startups, makers and inventors connected with government representatives responsible for developing and administering innovation and entrepreneurship policy. 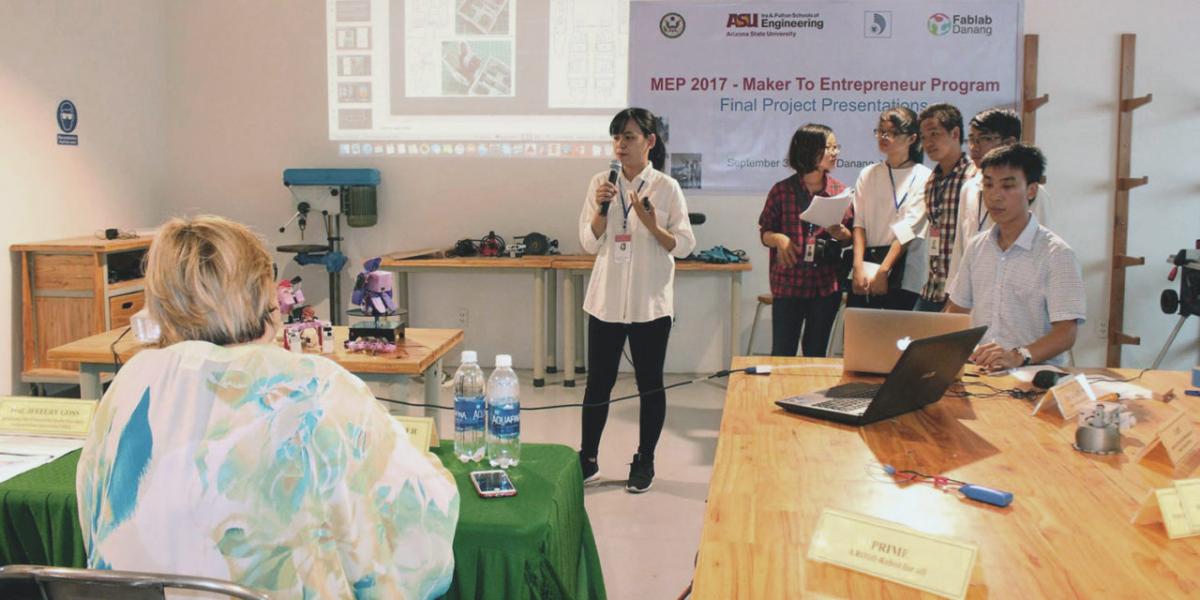 Above: Vietnamese student teams presented product prototypes at the Maker to
Entrepreneur Program’s competition at the University of Danang’s Maker Innovation Space in
September. Photo courtesy of Thao Nguyen.

Together, these stakeholders identified challenges and solutions to support Vietnam’s burgeoning ecosystem, create economic value and drive development in science, technology engineering arts and mathematics, or STEAM.
Over the week of September 25, student teams from the University of Danang worked to create a viable idea to help real-world communities and businesses, and then build a tangible product.
For the final round, seven student teams brought their best ideas to prototype final products, pitch them and provide demonstrations of their prototypes at the University of Danang Maker Innovation Lab.
Products were scored on their originality, innovation, feasibility, social impact or business potential, and their prototype or proof of concept. 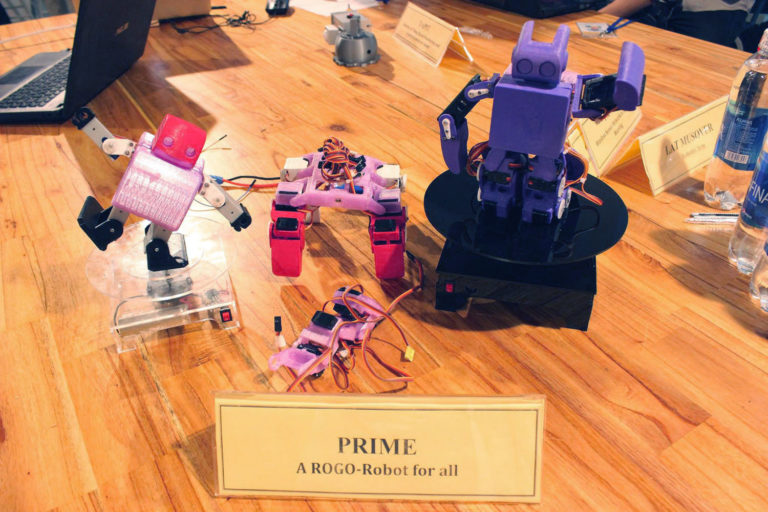 The competition was judged in part by Jeffrey Goss, ASU associate vice provost of Southeast Asia, executive director of Global Outreach and Extended Education in ASU’s Ira A. Fulton Schools of Engineering and principal investigator of BUILD-IT, a project implemented by ASU to help Vietnam modernize its science, technology engineering and mathematics higher education system. ASU’s Kellie Kreiser, executive director of Thunderbird for Good, was among the additional competition judges.
First place and $700 went to team PRIME, who created A ROGO-Robot, a simple, modular robot designed to teach community children the basics of programming, integrated circuits, mechanics and other technology skills.
Team PANT9X created a wireless sensor network to monitor soil and weather conditions for a landslide early warning system to take second place and $400.
The Guardians team took home third place and $300 for their work creating a smart hydroponic system for growing vegetables that is easy and affordable enough for home use. The autonomous system allows households to grow their own vegetables free of harmful chemicals in an energy and water efficient manner.

Seven teams competed in the final round of the Maker to Entrepreneur Program’s
competition in September 2017. The top three teams took home $1,400 in prizes.
Photo courtesy of Thao Nguyen.